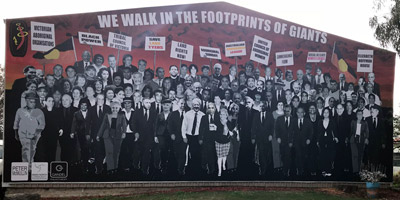 This mural was funded by Gandel Philanthrop, Peter McMullin and the Inner Northern Community Foundation.

We Walk in the Footprints of Giants mural depicts all the Board members of the AAL for 60 years from 1957-2017 with the ones at the back walking in the footprints of the giants in the front. For over six decades these leaders made a huge contribution to the AAL by lobbying, protesting and marching together for the common cause of gaining rights for Aboriginal people, not only in Victoria, but throughout Australia.

The contribution that each person featured on this mural made to ensure that the AAL continued to exist so that it could provide services to the most vulnerable members of our community will only be measured by time.

These giants are marching to because there have been many marches for justice and land rights (including the Save Lake Tyers campaign) since 1957 when the AAL was established.